The Hungarian present tense is easier than you may think. In this mini lesson you will learn the grammar rules and the concepts in about 30 minutes. We break it down for you and show you everything you need (including many examples and memory hooks) for a quick learning experience.

While the Hungarian grammar is often the cause for serious headaches, it also has its shiny and sunny sides. Good news: Conjugating verbs in the present tense is one of them:

We have subdivided this mini-lesson into the following sections:

What you Need to Learn beforehand

1. Learn the Difference between the Indefinite and Definite Conjugation of the Hungarian Present Tense

2. The Indefinite Conjugation of the Hungarian Present Tense

3. The Definite Conjugation of the Hungarian Present Tense

What you Need to Learn Beforehand

And of course you should know what  “conjugation” is (since that’s what this article is about).

Broadly speaking, verb conjugation is the changing of a verb’s form to express a different person (I, you(sing.), he / she / it, we, you(pl.), they) and its tense. In that way, a conjugated verb can tell us who is doing the action and when.

English is blessed with a very easy conjugation:

In many other languages (including Hungarian), the verb changes with every grammatical person:

In this lesson, we will show you what you have to look out for and how to remember the rules best.

But that’s enough of introduction; let’s dive straight in and start your stopwatch!

1. Learn the Difference between the Indefinite and Definite Conjugation of the Hungarian Present Tense

One of the tricky specialties of the Hungarian present tense is that there are two different conjugation forms depending on the object of the sentence/statement:

The use of the definite article “a(z)” (“the”) and/or the pronouns “az” and “ez” (this and that) are good indicators to use the definite conjugation.

In reality it is a bit more complicated than that (dry and boring grammar books are good proof), but in most of the cases this is enough. And even if you confuse the conjugation forms, everyone will still understand you. Even Hungarians themselves confuse the two forms sometimes, so there’s really no need to worry.

2. The Indefinite Conjugation of the Hungarian Present Tense

For a better understanding we subdivided this chapter into the following 7 sections:

2.1 Regular verbs with back vowels

The regular verbs with back vowels are the biggest chunk. All other verb groups can be deviated from these.

Don’t worry, as we will also help you to memorise the endings with some smart memory hooks, so you will master them in no time.

The following table shows the indefinite conjugation of  the verb “tudni”, representing the the back vowel verbs.
The suffixes/endings, which you’ll have to memorise, are marked in red:

Now let’s have a look at the front vowels (which includes the words with ö, ő, ü, ű in last syllable):

*ül has no conjugation for Én -> téged, titeket (since “I sit you” doesn’t make sense).

As you can see, the endings above run things by the following “vowel rule“:

(This is not an official rule; it’s just a concept we found useful.)

Keep in mind that you only have to memorize the endings for the back vowels; the front vowels (incl. ö, ő, ü, ű) follow the simple “vowel rule”.

By now, the biggest chunk is through, the rest is a walk in the park.

Verbs ending with two consonants (e.g. “mond“) or  “-ít” (e.g. segít) get an additional vowel in some conjugations in order to simplify the pronunciation.

Also the infinitive form gets an additional vowel, e.g. mond(ani) and küld(eni).

Sounds complicated, but it’s really not that big of a deal.

Let’s have a look at some examples (connecting vowel marked in red) to get the concept:

The good thing is that the connecting vowels are following simple rules:

There are only two things to remember, and one of them is optional:

An example is worth a thousand words:

But see for yourself:

The irregular verbs are actually not part of this mini lesson, since they don’t follow all of the above rules.

But as you will see, as soon as you know the rules, also the irregular verbs are much easier, because actually they don’t break every rule.

A list of all 23 irregular verbs can be found on the page of this useful Hungarian verb conjugator.

3. The Definite Conjugation of the Hungarian Present Tense

This chapter is subdivided into the following 3 sections:

1. Regular verbs (with and without connecting vowels)

3.1 Regular verbs (with and without connecting vowels)

Let’s start with the regular verbs of definite conjugation:

From now on Hungarian will unfold its full beauty (by refusing most of the rules we learned so far).

This is nothing you have to memorise; this is something you just have to understand, and luckily it’s not complicated:

In order to harmonise the pronunciation every -sj, szj and zj is transformed in -ss, -ssz and -zz.

You get the idea… Here are some more examples:

Good news: with these 2 groups above all the definite conjugation forms are basically covered!

All other verb forms (ik-verbs and irregular verbs) are almost never used with or don’t even have a definite conjugation!

Heureka, we did it!

Applying these rules above you will be able to master the Hungarian Present Tense.

Are we completely crazy to claim this can be learned/understood in approx 30 minutes? Please let us know!

Of course we are aware that it will take more time and practice than a mere 30 minutes to apply these rules fluently in a normal conversation.

Still, never let some grammar errors stop you from communicating, it absolutely doesn’t matter if you confuse one or the other conjugation. Trust us, even Hungarians confuse them sometimes!

And never forget the most important rule in language learning: HAVE FUN!

Mini Hungarian Lesson – Everything You Need to Know about “Meg” 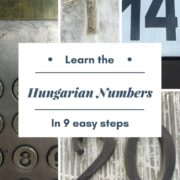 Mini Hungarian Lesson: Everything You Need to Know about "Meg" 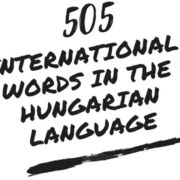 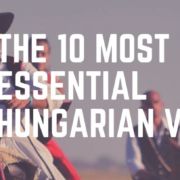 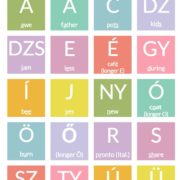 Mini Hungarian Lesson: Everything You Need to Know about “Meg”

Mini-Lesson: 505 International Words in the Hungarian Language
Scroll to top